Take a Bite Out of Vaping

TAKE A BITE OUT OF VAPING 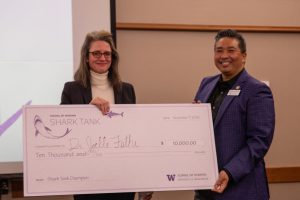 Could you take decades of work and ideas, condense them into a five-minute pitch, then present the result to a Shark Tank audience? As it happens, alumna Joelle Fathi, DNP ’13, R.N., ARNP  ’00, could and did. In fact, she won the grand prize at a Shark Tank competition, held last November by the UW School of Nursing.

To this day, Fathi, an associate teaching professor in the Department of Biobehavioral Nursing and Health Informatics, is unsure if she won because of firm convictions or alarming statistics.

“If vaping numbers continue on their current trajectory, we’ll soon surpass the levels of cigarette consumption recorded in 1964,” says Fathi. That year, nearly half of all adult Americans smoked.

Nicotine, whether delivered by a traditional cigarette or an e-cigarette (vaping), is a highly habit-forming stimulant — and an e-cigarette, which pushes nicotine to the brain in about seven seconds, is a very efficient delivery system. It can take as little as three days to develop a chemical dependency.

Unfortunately, vaping — which can damage the developing brain and may contain harmful chemicals — has caught on among teenagers. In 2011, approximately 1.5% of high-school youth reported vaping in the previous 30 days. By 2019, that number had leapt to 25.7%. Fathi, who has helped patients quit smoking for many years, took notice.

“I’ve spent my practice on the adult side of the continuum. Today, I see these young people who have such bright futures ahead of them. And through no fault of their own, they are at risk for developing a lifelong dependency on nicotine,” says Fathi.

“I knew I wanted to help prevent that from happening,” she says. “The question was how.”

It was at that point that Fathi remembered the UW School of Nursing’s Shark Tank — a contest in which nursing researchers vie for innovation funding to address pressing health-related issues. As of July 2020, generous donors to Shark Tank have enabled the distribution of seven grand prizes and 12 participation awards, along with $74,000 in funding.

Jody, who had worked at Harborview Medical Center and Swedish Medical Center, primarily in surgery, has a strong commitment to and interest in nursing. In his turn, David spent many years with medical equipment companies as a designer and executive, and he has extensive experience in bringing creative approaches to medical challenges. The Smiths’ gift, made in 2017 to create an endowment that fosters nursing innovation, has supported Shark Tank as a vehicle to promote inventive nursing research in the community.

“My forte was always looking at a different way of approaching a problem, and we were interested in helping other people make those sorts of innovations,” says David. “We also wanted our gift to act as an amplifier, so the community could learn about the fantastic research taking place at the UW School of Nursing.”

Fathi’s winning Shark Tank innovation is to create no-cost educational tools on vaping prevention for the Seattle Public Schools system. The award money will allow her to interview students and staff and to develop an online educational platform. If sufficient funding remains, she’ll have the program translated into several languages used by district students.

Like David, Jody realizes that ideas like Fathi’s — and gifts like the ones she and her husband made — can change the future. She encourages other donors to join them in giving to nursing and nursing innovation.

“We’re impressed with how a small amount of money can further an idea,” says Jody. “It’s really just a seed, but sometimes it’s enough to get a project launched.”

Fathi, grateful for the gift, agrees.

“I hope this tool will reach thousands of teens in the Seattle area,” Fathi says. “Shark Tank and programs like it can make a tremendous difference in people’s lives.”