Eleventh-grader Abby Park lowered her expectations when she heard that Nurse Camp, held by the UW School of Nursing, was going online. “To be honest, I just thought it was going to be super-boring,” she says.

When Park applied to camp earlier in 2020, she had signed up for an in-person adventure, one where she could explore the idea of a career in health care. After COVID-19 arrived on the scene, Park wondered just how well an online camp would work. She soon had her answer.

“It was a really good experience overall,” Park says. “I gained so much knowledge about the many professions in the nursing field and how to get into nursing school.”

Nurse Camp was founded in 2008 as a response to a difficult challenge: students from diverse backgrounds were applying to the school, but they weren’t getting accepted. The admissions committee didn’t see the prospective students as competitive.

Carolyn Chow, M.A. (’94), then the school’s admissions director, points to a whole host of factors that affect students’ lives and applications. These factors include fewer resources, low expectations from teachers and guidance counselors, and, not least, systemic racism.

Chow had begun to reengineer the school’s admissions process to become more equitable — to take a more holistic look at a student’s work history, capacity for compassion and leadership potential, as well as their progress on prerequisites. At the same time, Chow and UW Medical Center faculty Lauren Cline, BSN (’02), M.N. (’04), Ed.D., were contemplating the other half of the equation: the students who were applying.

“Lauren and I were thinking: How do we help underrepresented students really sell themselves and really feel confident going into that application process?” Chow says.

Their answer was Nurse Camp. 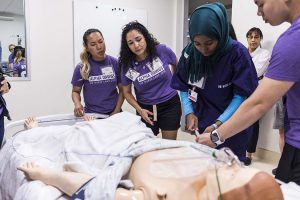 Justina Lang is a second-year nursing student, a co-lead of DAWGS (the school’s Diversity Awareness Group) and a living example of Cline’s andChow’s master plan for Nurse Camp. As part of DAWGS, Lang — a formercamper — now plays a major role in running the program.

“We reach out to schools and counselors who work directly with first-generation students and students from low-income households,” says Lang. “A lot of our students are people of color, students who are the first in their family to go to college.”

Lang, who was the first person in her family to go to college, knows just how valuable Nurse Camp can be. The kids find their role models, making contacts who will sustain them through high school and college.

“Camp let me see what the career really entails, and it also gave me a support system,” says Lang. “Having access to people who you really liked and could ask for help — that’s something that I really wanted to pay forward.”

Normally, during July’s five-day Nurse Camp, campers eat together, shadow nurses at UW Medical Center (the medical center is a partner in producing the camp) and spend time in the Simulation Center, among other activities. COVID-19 made a 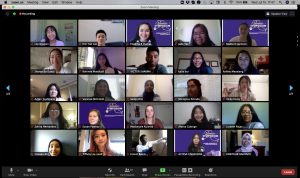 “We had to decide what to focus on,” says Cher Espina, co-chair of Nurse Camp and the school’s director of admissions and student diversity. “We still wanted the students to understand what it’s like to be a nurse and to keep that sense of mentorship.”

Espina, along with co-chair Enedina Dumas, Lang and the other planners, reduced the usual full-day session to three hours online. Those hours, however, were chock-full of icebreakers, activities and breakout discussions with multiple mentors. Students learned about effective nursing communications, the admissions process, health disparities and the many professions that nurses can pursue.

What was the students’ favorite part of camp?

Meeting the nursing students gave camper Abby Park a jolt of confidence. Although Park is taking early college courses through Washington’s Running Start program, she had wondered if she were smart and hard-working enough for the nursing profession.

“Camp helped me be so much more confident in wanting to be a nurse because everyone was so supportive,” says Park. The camp also inspired her to set some new goals.

“I’m trying to finish all my high school credits,” Park says. “But after that, I’m going to try to take some prerequisites for nursing school.”