Vaccines: From the Individual to the Community

When someone says, “Why do we need to get vaccinated?” SarahAnn McFadden thinks of her aunt and uncle. Both had polio. As children, they got around with braces and crutches. As they got older, they became wheel-chair bound, struggling with tremors and weakness. They were luckier than some, but still severely impacted.

A Robert Wood Johnson Foundation Future of Nursing scholar, McFadden’s PhD dissertation focuses on county level toddler vaccination rates. With measles outbreaks on the rise, her research is timely. “Right now, I’m in my final quarter. I’m going to defend in May,” says McFadden. “A lot of what I’m doing now is thinking about the implications. I’ve run the analysis, seen the variation among counties, the impacts of different policies, and now I’m looking at what it means and how to push the research forward, drive change and reduce outbreaks.” 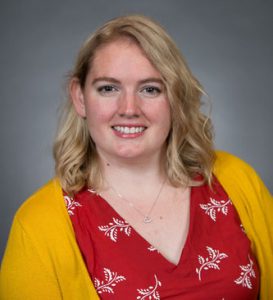 She became interested in pursuing the topic as a pediatric nurse, after a particular interaction. “My patient’s mother was very adamant about vaccines,” says McFadden. “‘When I was trying to educate her, she told me I wasn’t educated and that I should look at the research and think for myself. It was frustrating, because I wanted to understand where this mom was coming from.”

McFadden had always thought of a PhD as the epitome of learning. “I’ve wanted a PhD since I was in utero,” she says. After being a nurse for four years, she chose UW for practical reasons, she already had established a life in Seattle, but also because it’s one of the best programs in the country with access to a vast number of resources. Taking classes all over campus has been one of the highlights, from nursing to law to social work. “Professors, across the board, incorporate all kinds of perspectives in their classroom,” says McFadden.

In the case of McFadden’s research, different perspectives figure prominently in the decision of whether or not to get vaccinated. People may have strong reasons for not getting immunized, but also may not realize that they could be putting someone in harm’s way. “One of my professors is immune compromised,” says McFadden. “She’s someone who can’t get vaccinated and it limits day to day life, where she can go. Professors need to be accessible to students, but if a student is unvaccinated and goes to her office hours the student will endanger her.”

She also thinks about being in Seattle, and the number of cancer treatment centers. As a nurse at Seattle Children’s she saw children wearing masks, not to protect others, but to protect themselves. If they returned to a school with unvaccinated students, they would be put at even greater risk.

Part of the importance of her research is highlighting where the local or federal data falls short and identifying needs for future study to better target solutions. McFadden is also interested in the fact that policy often focuses on school-age immunization, but that kind of approach might delay vaccination by five or six years, depending on when the child enters preschool or kindergarten, putting communities at risk of an outbreak in the meantime.

With nurses being the ones who interact with patients, McFadden believes that nursing research offers another way for them to have an impact. “Getting nurses to the table to have discussion about health insurance or racial disparities, bringing that perspective and getting our voices out, it’s why I’m interested in what I do,” she says. Once she completes her PhD, she plans to apply to a post doctorate and then she hopes to become a faculty member.