According to US News and World Report, you won’t find a better public school that offers a Doctor of Nursing Practice Degree. 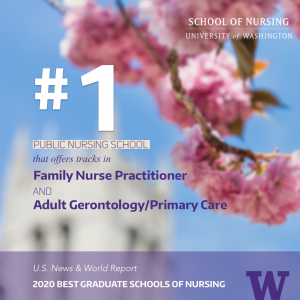 “While top rankings are significant because they validate the good work that we do,” said Executive Dean Azita Emami, “our School is committed to the most important measure of success: the ability to produce diverse graduates who can advance nursing science and leadership by providing expert, evidence-based, culturally congruent care to address health disparities in Seattle and around the world.”

This was the first year that the School submitted data from all three campuses. The ranking for public schools that offer a Master’s degree is specific to the Bothell and Tacoma campuses.