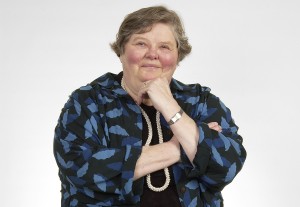 Barnard was an internationally recognized pioneer in the field of infant mental health, which studies the social and emotional development of children during the first five years of life. She was a renowned researcher, teacher and innovator.

She also served on the Board of Directors of the ZERO TO THREE National Center for Infants, Toddlers and Families and as a board member of the World Association of Infant Mental Health.
“Dr. Barnard was a visionary nurse scientist who believed deeply that every child not only has the right to early nurturing relationships, but also that those relationships are the foundation for life-long healthy development,” said Dr. Azita Emami, Robert G. and Jean A. Reid dean of the UW School of Nursing. “This belief inspired her landmark research and compelled her to provide tools and professional development to infant and early childhood mental health practitioners so that every child could experience the best possible start.”
A Life Celebration service will be held at a later date, and details are still pending.

Barnard was born in 1938, in Omaha, Neb., the only child of a Union Pacific Railroad worker and homemaker. Barnard wanted to be a nurse since the first grade. In 1954, she got her first nursing job at Douglas County Hospital in Nebraska at the age of 16; she graduated from the University of Nebraska with her bachelor of science in nursing in 1960.
After receiving her master’s degree from Boston University, she was recruited to the University of Washington in 1963, where she stayed until her retirement in 2006. She was instrumental in generating a national movement toward investigating and emphasizing maternal child health issues and the importance of the infancy period. 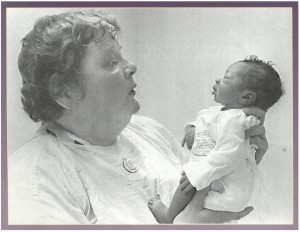 Dr. Kathryn Barnard with an infant, circa 1960s

In the 1970s, when Barnard began her studies of infants and their parents, there was minimal appreciation for the connections between earliest communication, touch, brain growth, and the ways humans develop the social, emotional and behavioral capacities to self-regulate, connect with others and experience the world as a safe and predictable place.

In 1971, the U.S. Public Health Service commissioned Barnard to design a research project to help identify children who could be at-risk for later developmental problems because of their early environments; this study was developed as part of the Lyndon B. Johnson War on Poverty.

Barnard earned her Ph.D. in Ecology of Early Childhood Development from the University of Washington in 1972.  During her dissertation, she became interested in how an incubator could help a baby maintain more mature patterns of sleep through simulating rocking and heartbeat.  She developed a rocking bed and found that rocking improved infants’ weight gain and motor and sensory functions.

Today, rocking chairs are standard in hospital nurseries and neonatal intensive care units, and both parents and caregivers are encouraged to rock the tiny infants. Barnard said this success with early intervention was one of her proudest personal contributions to the field of child development.

Barnard continued to promote infant mental health nationally throughout the 1980s, joining the nascent organization the National Center for Clinical Infant Programs, which is now ZERO TO THREE, and serving on an advisory group of the National Institutes of Mental Health. She was instrumental in the development and publication of the Diagnostic Classification of Mental Health and Developmental Disorders of Infancy and Early Childhood (also known as the DC:0-3).

“Babies everywhere have lost one of their foremost champions,” said Matthew Melmed, Executive Director of ZERO TO THREE. “Dr. Barnard was committed to putting research into practice to improve the lives of babies. Her fearless determination helped shape public policy and promote the special and sensitive relationships that exist between parents and their babies. Dr. Barnard served on our Board for 37 years – including one term as President – and ZERO TO THREE is honored to continue her legacy through the work we conduct every day.”

She served as an associate dean of the UW School of Nursing in the early 1990s before resigning to pursue further research.

In 2001, Barnard established the Center on Infant Mental Health and Development as a collaboration between the UW School of Nursing and the UW Center on Human Development and Disability to support the professional development of interdisciplinary infant mental health practitioners. The center was renamed in her honor in 2012. It continues to provide quality research, training and education to promote healthy social and emotional development. 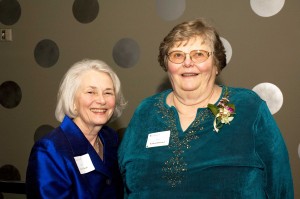 “Kathryn Barnard’s vision, coupled with her passion for infants and their healthy development, led her to developing several approaches to their care,” said Dr. Nancy Woods, dean emerita of the UW School of Nursing and a close colleague of Barnard’s.

“Her compassion for mothers of infants at risk led her to develop programs that supported women who had multiple risk factors for poor pregnancy outcomes and parenting – for example, drug use, poverty, mental health problems, social isolation – through nurse home visitation throughout their pregnancy and first year of life,” Woods said. “She shared her passion through tireless commitment to her students and professional colleagues as well as through her efforts to shape policy for infant mental health and development.”

Barnard’s research provided the foundation for Nursing Child Assessment Satellite Training (NCAST), which produces and develops research-based products, assessments and training programs to teach professionals, parents and other caregivers the skills to provide nurturing environments for young children. Her dissemination efforts were groundbreaking as she translated her research into tools that infant mental health professionals could use in their work with families. With NCAST, Barnard was decades ahead of what is now referred to as distance learning.

“Dr. Barnard used early satellite communications technology (Telstar era) to project training about infant development and parenting around the US and the globe, teaching thousands of nurses,” Woods said.

Since its inception, PCI has been employed in almost 100 published research studies. There are more than 800 NCAST Certified Instructors, representing almost every state in the United States and several foreign countries, and these Certified Instructors have, in turn, trained more than 20,000 health-care workers in the PCI Scales.

Barnard earned numerous honors during her life, including the Gustav O. Leinhard Award (which she shared with close friend and colleague Dr. T. Berry Brazelton) from the Institute of Medicine, of which she was also an elected member; the Episteme Award from Sigma Theta Tau International, the Living Legend Award from the American Academy of Nursing, and the ZERO TO THREE Lifetime Achievement Award.

Barnard has received more than 15 other major awards, including the Lucile Petry Leone Award for Teaching; the M. Scott Award for Contributions to Nursing Science, Education and Service; the Martha May Eliot Award for Leadership in Maternal-Child Health; the Nurse Scientist of the Year Award; and the International Society of Psychiatric-Mental Health Nurses Foundation inaugural Lamplighter Award.

“Through the years, Kathy inspired and trained hundreds of nurses and Ph.D. students,” said Susan J. Spieker, current director of the Barnard Center. “She brought to them novel ideas about how infant-parent relationships impact children and inspired the professional trajectory of many. After studying with Kathy, no one was the same. Today they continue to answer her question: What about the babies?”

Spieker spent three years working with Kathryn as a postdoctoral fellow with the John D. and Catherine T. MacArthur Foundation on the Transition from Infancy to Early Childhood.
“Kathy opened many doors for me throughout my career,” Spieker said. “She encouraged me to write my grants and launch myself as an independent investigator. I think of Kathryn as a great facilitator. She was very supportive of her mentees while allowing them freedom to chart their own paths, to individuate.”

In lieu of flowers, Dr. Barnard requested that gifts be made to the Kathryn E. Barnard Endorsement Fund at the Washington Association of Infant Mental Health. Visit wa-aimh.org for more information.