Population health and the future of nursing

Deans, directors of nursing schools, programs throughout the State of Washington declare commitment to future of nursing education

Deans and directors of nursing schools and programs across the state of Washington have declared their commitment to developing nurses who are equipped to create an equitable and healthy future by integrating population health concepts in nursing curricula. As a result, baccalaureate- and graduate-prepared nurses in Washington will be better prepared to improve public health as leaders, clinicians, scholars and policy advocates.

Population health is a broad concept encompassing not only the prevention and elimination of diseases and injuries, but also the intersecting and overlapping factors that influence health. These factors include social determinants of health and inequities that undermine health. 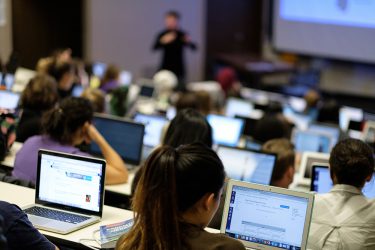 The commitment to changes in nursing curricula was developed and disseminated through a white paper published by the Washington Center for Nursing. The white paper was created in collaboration with 18 higher education institutions and under the leadership of Dr. Azita Emami, executive dean of the University of Washington School of Nursing; Dr. Kristen M. Swanson, dean of Seattle University’s College of Nursing; and Dr. Betty Bekemeier, UW professor of nursing and a public health nursing expert. Jacquelyn Hermer, a UW Doctor of Nursing Practice – Community Health Nursing student, helped coordinate and edit the white paper.

“As deans and directors of nursing schools and programs in our state, we recognize that in order to change health care, we must begin by enhancing nursing education,” Emami said. “We are undertaking major efforts to see that population health is an embedded part of every nursing class, at every level. We want all nurses to be prepared to deliver chronic disease management and prevention services, as well as address the social determinants of health through assessment, leadership, collaborative practice, and policy development.”

The white paper articulates a clear vision to intentionally embrace a population health focus in nursing that considers the social determinants of health in all areas of nursing practice.

Nursing has a historical commitment to social justice, and education is a critical pathway for preparing nurses to understand, evaluate and act on social forces that influence health – no matter the environment in which these nurses ultimately work.

“Nurses have a holistic view of individuals, families and communities, as well as the systems that support the community,” said Bekemeier, who is also the track lead for the UW Doctor of Nursing Practice – Community Health Nursing program. “This multilayered view is how nurses perceive the world and maximize health. At the same time, nurses bring a clinical understanding of how healthy starts really impact the health of kids, their families, their communities and even chronic diseases later in life. Nurses have the ability to work across sectors, speaking the language of providers and health systems, while acting as powerful advocates for communities.”

In the white paper, nursing deans and directors of baccalaureate nursing programs, as members of the Council of Nurse Educators in Washington State (CNEWS), committed to:

As part of this commitment, the UW Seattle campus has planned and begun implementing several curricula changes to incorporate a population health focus. Those changes include the following work.

UW School of Nursing and Public Health – Seattle & King County has partnered on the new Best Starts for Kids initiative to improve the health and well-being of King County. The initiative invests in prevention and early intervention for children, youth, families and communities who are at risk for a host of chronic diseases. It is the most comprehensive approach to early childhood development in the nation, supporting families through prenatal care, birth, early childhood and adolescence.

The initiative was made possible by a voter-approved levy to fund prevention and early intervention strategies to improve the health and wellbeing of children, youth and their communities.

As part of the initiative, graduate nursing students, in collaboration with the health department, will advance the research base of Best Starts for Kids by translating evidence into practical application (DNP Community Health Nursing Students) and generating evidence that guides the initiative’s efforts (Ph.D. students). They will have an opportunity to shape and have a leadership role in one of the most progressive programs for early childhood development in the nation.

The Community Health Nursing track in the DNP program is designed for nurses who are interested in improving population health, healthcare, and community systems in the U.S. and around the world. Students learn to become leaders to work effectively with diverse stakeholders and communities. They also use skills in community assessment and engagement, policy and program development and evaluation, budgeting, and management to drive healthy change, policy, and high impact solutions to health problems.

In the 2018-2019 academic year, the Community Health Nursing track will be formally renamed to Population Health Nursing to more adequately reflect the current and future need for public health nursing expertise and an adapted curriculum. The new track will have three areas of focus:

Other institutions joining in this commitment include:

About the UW School of Nursing

The UW School of Nursing is one of the nation’s leading nursing schools dedicated to preparing the next generation of nurse leaders to ensure health equity for all people through care, advocacy and research. We make an impact in communities in Seattle and throughout the world by providing lifelong learning opportunities, conducting innovative research and accelerating scientific discovery.

At the UW School of Nursing, population health research and improvement occurs at every level – from internationally recognized faculty to first-year nursing students.

Population health statistics at a glance: