As a member of a citywide task force developed to analyze the pros and cons of delaying high school start times, Associate Professor Teresa Ward put her years of sleep research to work. This research overwhelmingly showed the detrimental effects of lack of sleep on teenagers, from psychosocial issues like decreased motivation, cognitive deficits and impulsiveness, to physical health concerns like a higher risk for obesity, high cholesterol and type 2 Diabetes mellitus.
“Inadequate amounts of sleep and inconsistent sleep routines are associated with cognitive deficits, daytime sleepiness, poor quality of life, and family distress,” Ward said. 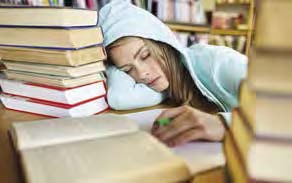 Chronic sleep loss in teenagers is now recognized as a major public health problem. According to the task force, an entire generation of adolescents is entering adulthood after years of chronic sleep loss and all the potential adverse effects. The goal of the research task force was to help city leaders implement policy changes to improve the future. Ward and two of her colleagues, Dr. Michelle Garrison and Dr. Maida Lynn Chen, agreed strongly and put forth the call:
“Delaying high school start times is the best thing to do for all teenagers in Seattle.”
In addition to their own research, the task force cited data from completed and ongoing studies in school districts that delayed secondary school start times show improvements in student achievement and other outcomes (for example, more sleep at night, less sleepiness during the day). The students also are less likely to engage in risky behaviors and have fewer motor vehicle accidents while improving school performance and demonstrating emotional stability.

Perhaps most profoundly, adequate sleep is important for the development of prefrontal regions of the brain, which remain underdeveloped until 24-25 years of age.
The Seattle Times published an Op-Ed by Ward and her colleagues in October 2015; in early November, the Seattle School Board voted to change school start times according to the evidence.