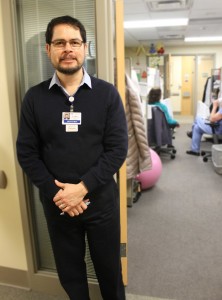 As the first ever UW Medical Center Cardiovascular Nurse Practitioner Fellow, Carlos Camal Sanchez feels like new universe has opened to him — and academia has pulled him into its orbit.

“I wasn’t even thinking about academia,” he said. “Nursing is so rewarding, and I just wanted to give the best patient care.”

But after completing the UW School of Nursing Doctor of Nursing Practice program, where his professors instilled in him the spirit of inquiry, Camal Sanchez couldn’t turn down the chance to explore cardiothoracic nursing in a profoundly new depth and breadth.

The UWMC Cardiovascular Nurse Practitioner Fellowship was started in Fall 2015 to prepare postgraduate nurse practitioners in evidenced-based practice and the specialized skills needed to care for chronic and acutely ill patients across the continuum of cardiovascular specialty areas.

The fellowship is built on the criteria for an ARNP Fellowship outlined by the American Nurses Credentialing Center (ANCC) and includes practice-based experiences and supplemental activities to promote nursing professional development.

Nurse Fellowships are still relatively rare, with just a few dozen around the country. Still, for Camal Sanchez, accepting wasn’t an easy decision. He had to give up a well-paying job as a nurse at Harborview Medical Center, where his wife also works as a nurse, and commit to an extremely intensive yearlong program. Now in his second month, he knows without a doubt it was the right choice.

“The Fellowship Committee at UWMC began their work in August 2014 and took on the task of proposing a Cardiovascular Nurse Practitioner Fellowship to the hospital administration,” said Kathleen Errico, Ph.D., A.R.N.P., UWMC director of advanced practice Nursing. “The Committee was delighted when the proposal was funded and equally delighted to welcome Carlos Camal Sanchez as the first fellow.”

Each rotation brings Camal Sanchez into close companionship with rotating attending physicians and fellows, who have welcomed him into their group wholeheartedly. Sometimes he feels like a novice, but asserts that NPs do have a distinct and different knowledge than doctors: bedside care.

However, now that he’s been pulled into the “academia orbit,” as he says, it would be hard to return to patient care anywhere other than an academic medical center.

There’s just so much to learn.