Alexi Vasbinder originally got into research because she needed a job.

Working in a lab seemed like a fun, hands-on way to try something new. She would have been happy just washing dishes, but instead the first lab she worked in pushed students to get actively involved in the scientific process. Not only did she assist with the lab’s research, they gave her the freedom to develop her own experiments and explore her own questions. 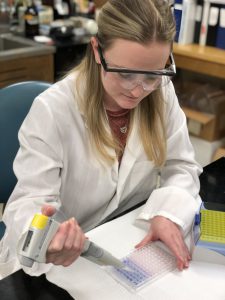 She still remembers a moment toward the end of undergraduate, when her experiment got perfect results, essentially proving a part of her lab’s research hypothesis.

“It was amazing,” Vasbinder said, “I couldn’t have gotten any clearer results. I think they still cite and use those images.”

That first lab job ended up being the start of a promising research career, one that recently earned her a place in the 2019-2020 Magnuson Scholars Program. The program selects one graduate student from each of the Health Sciences schools every year who performs well academically and shows potential as a health sciences researcher.

“Ms. Vasbinder is exceptionally talented, highly motivated, and hard-working,” said Vasbinder’s mentor, Kerryn Reding, PhD., MPH, RN. “Her intellectual curiosity paired with her strong educational training is indicative of her strong potential for success as a researcher in the health sciences.”

When she came to UW for a PhD in nursing science, Vasbinder turned her research focus from neuroscience to cancer and cardiology research. It was the perfect way to follow her passion for digging deep into biological mechanisms while doing work that she felt could make a large impact.

“These are two of the greatest contributors to disease burden and death in the country,” Vasbinder said.

Her project is looking at fatigue and cardiotoxicity, in essence heart disease, in breast cancer patients after radiation therapy. It’s not well-understood why radiation can leave some patients with these lasting symptoms.

She wants to identify biological markers in the blood of former cancer patients who have these symptoms after radiation, an important first step in uncovering the biological mechanisms that connect radiation, cardiotoxicity and fatigue.

If she can identify different molecules in the blood that are common in patients who develop the side effects, they could be potentially used to predict who’s at higher risk down the road.  If health care providers know who’s at higher risk, they might be able to tailor treatments and develop more effective interventions to head off some of these after effects.

Answering this question requires hundreds of blood samples from cancer patients. So Vasbinder turned to the Women’s Health Initiative (WHI), a national study measuring numerous health factors and conditions, including cancer, in over 150,000 women aged 50 -79. Their massive repository of data and biological samples can give researchers like Vasbinder the opportunity to answer many of these types of questions, without having to go out and recruit hundreds of new research participants.

But getting access to those samples is an achievement in and of itself. Using the WHI’s biobanks requires submission of a proposal to a review committee, which can be an intensive process of submission, editing, and resubmission.

It took Vasbinder almost eight months and two failed proposals until they finally gave her project the green light.

“It felt long because the PhD program is only so many years,” said Vasbinder. “If this didn’t get approved, I was going back to the drawing board.”

But looking back, she said the process only helped her hone and simplify her proposal, improving it with each resubmission. She is getting the samples this summer to start testing.

The support from the Magnuson Scholars Program will help her build the science on radiation treatment, cardiotoxicity and fatigue and pursue a career in nursing science research.

After graduation, Vasbinder intends to pursue post-doctoral opportunities before applying for faculty positions in nursing science.

“What’s been the most surprising is the amount of growth that’s happened from year one to year three,” Vasbinder said. “When we first started, none of us knew what we were doing, none of us had a topic, none of us had a question. Now looking back I’ve come a really long way. I already have my proposal done, I have a question and I’m excited about what I’m doing.”